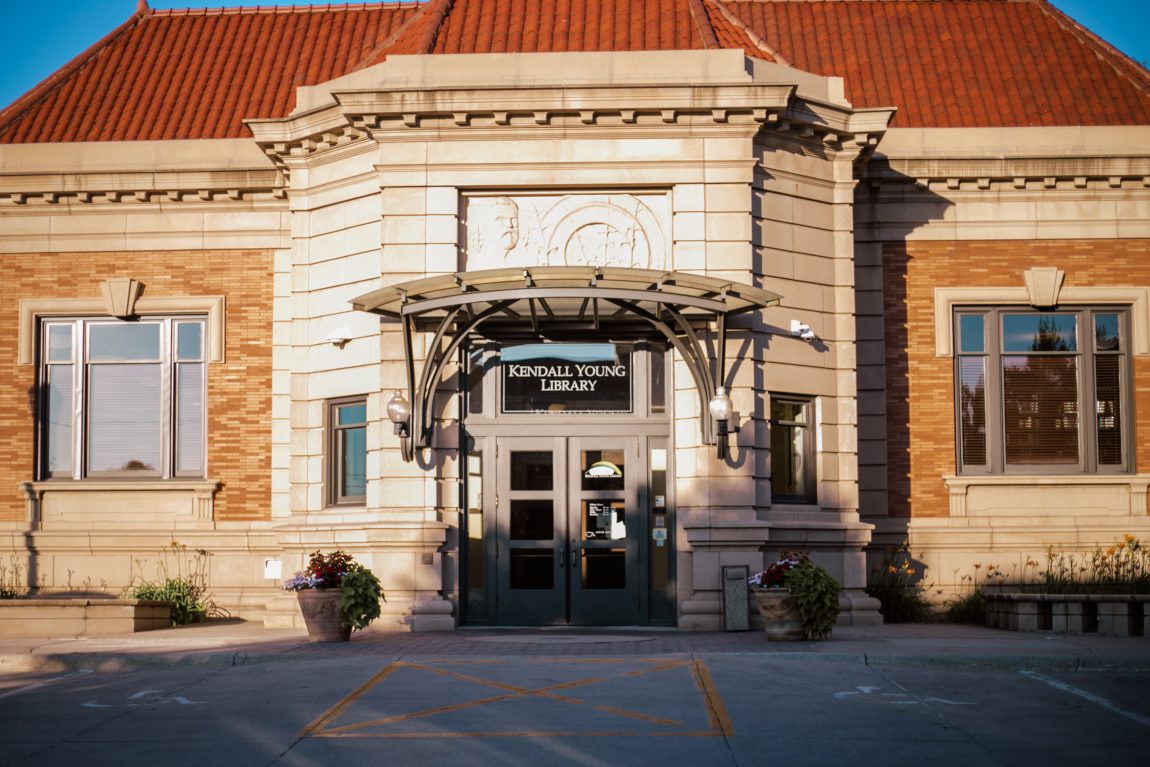 Kendall Young Library is a welcoming community center that empowers lifelong learning for all.  We’re into people, books, technology, and stories.

When Kendall Young passed away in 1896 the citizens of Webster City were surprised to learn that Mr. Young had left his estate valued at $150,000 to the City of Webster City, in trust, “for the establishment and maintenance of a free public library.” The construction of the Beaux Arts style library was completed in 1905 at a cost of $50,000. Special features included gold marble columns from Africa, terrazzo and mosaic floors, stained glass windows and a stained glass dome.

In 1984 a fundraising campaign was started to raise money for an addition to the library. After receiving two donations, each in excess of one million dollars and many smaller gifts, the architectural firm of Meyer, Scherer and Rockcastle was hired to design a seamless addition. Construction began in March 1997 and was completed in November of 1998. The original library was 9600 sq. ft. and the expansion increased the size to 22,300 sq. ft. The beauty of the original building was maintained and stained glass windows and terrazzo floors were included in the expansion to enhance the appearance of the seamless addition.

Abastenia Eberle was born in Webster City in 1878 but only lived in Webster City for four years. As an adult she studied sculpture at the Art Students League in New York City. The sculpture ‘Puerto Rican Mother and Child’ c. 1901, displayed at Kendall Young Library, was Abastenia’s earliest attempt to model life that she saw around her. Immigrants and street children were models for most of the 21 sculptures on display at the library.

The windows were presented to St. Paul’s Universalist Church by Mrs. Jane Young in 1898.  Charles R. and Joan M. Stauduhar donated the Jane Young Window to Kendall Young Library in 1992 when the church was scheduled for demolition.  The original window was located at the front of the church facing Bank Street and measured 6′ by 14’6″.  In 1998 a stained glass firm was hired to remove the arch and divide the window into two sections so they could be installed in the library addition.  Two lower horizontal panels were moved to the top of each window to complete the redesign.

This collection of 170 dolls was donated to the library in 1944 by Arch Foster and his son James after the death of Mr. Foster’s wife Evelyn. Mrs. Foster had collected the dolls during the last 15 years of her life. The collection includes many types of dolls including Frozen Charlottes, dolls from the Kate Greenaway series, Waxed head dolls, Papier-mache dolls and Parian dolls. The oldest doll is a waxed head doll from 1800.

Mr. Van Ness lived in Hamilton County from 1882-1895. When his wife died he moved to El Reno, Oklahoma and began to collect Native American artifacts. In 1898 Mr. Van Ness offered “curios of Indian work” to Kendall Young Library and asked that the library “provide for their preservation.” Forty-two items collected by Mr. Van Ness are on display in the Juvenile Department of the library. An Arapaho dance bustle ca. 1875 is the oldest item in the collection.